This topic provides an overview of Method 2 driftdown escape routes

Method 2 Driftdown Escape Routes are used to calculate a safe route through terrain in excess of the MORA elevation down to the applicable driftdown flight level for the aircraft in the event of engine loss. When an engine is lost, the aircraft will begin to descend to an altitude at which the atmosphere becomes dense enough to allow the remaining engine to sustain level flight. The aircraft will then level off. The descent in the case of a Method 2 Escape Route is dependent on the weight of the aircraft at the start of the leg during which the engine loss occurred. This implies that the maximum MORA threshold increases for later legs due to fuel burn-off causing lower weights (and by extension higher drift-down flight levels). Method 2 Driftdown Escape Routes begin at the first post-TOC waypoint with a MORA of more than the drift-down flight level and ends at the first post-TOD waypoint with a MORA of more than the drift-down flight level. See below for an illustration of the applicable portion of a sample route for which Method 2 Drift-Down Escape Routes are generated. 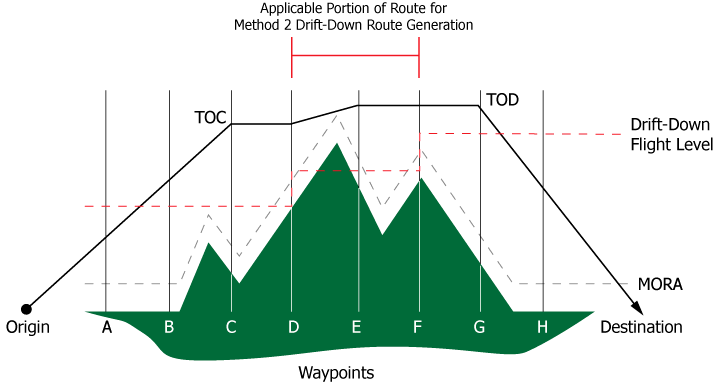 NAVBLUE Flight Plan automatically generates Method 2 Driftdown Escape Routes based on drift-down performance data for the aircraft. Some system configuration and format changes are required to implement this. Contact NAVBLUE for assistance.