Note: The following descriptions represent the typical access and privileges afforded to users designated as Dispatch Managers/Supervisors. Users with dispatcher privileges will have limited access to a subset of the screens presented.

See Aircraft Characteristics Fields for information on each field in this menu.

This data file is for the storage of information on each aircraft in the airline’s fleet. An aircraft record must be entered in the file before a flight can be run using that aircraft. Given no more than the airline’s identification number (or letters) for a particular aircraft (sometimes referred to as FIN, tail, wheel, hull or airframe number), other programs in the system can access this data file and obtain information such as aircraft type, operating weights, SELCAL code, and fuel consumption deviations.

When the program is selected, the screen will be filled with a blank record and Command Line.

The modes available are:

See Menu 220 Fields for a list and description of the available fields.

If you wish to amend a record, select Edit mode from the command line, and enter either the aircraft ID, or registration, for the aircraft whose information you wish to edit. The record for that aircraft will be displayed, with the cursor on the aircraft type field. You may then press <Enter> to move the cursor to the desired field. To change any entry you may use the backspace key to replace one character at a time, or you may use <Ctrl>-X to erase the field for a new entry.

Use this mode only if you want to remove the entire aircraft record from the file (e.g., if the aircraft has been sold or scrapped.)

Enter the aircraft ID or Registration. The record will be displayed, along with a Really DELETE? (Y/N) prompt.

You will not be able to delete an aircraft that has an outstanding MEL item against it; a Usage report will be printed indicating what must be deleted from other files before the aircraft can be removed from the system.

Video mode will enable you to view a single Aircraft Characteristics record at a time, and to step through the data file alphabetically (by Aircraft ID) by using the up and down arrow keys. If the ID you enter cannot be found, a Record Not Found, Press Enter for Next in File message will appear. You may return to a blank screen with the cursor positioned in the Aircraft ID field simply by pressing <Enter>. To exit to a Command Line prompt, enter <Q>.

SUMMARY/FULL REPORT (S/F): Indicate whether you want a summary or full report.

Note: In Screen mode it is recommended that you only select Summary. In this mode an individual aircraft record spans three pages and hence cannot be seen in its entirety. Video mode is generally a better option for viewing these records. The Summary report displays only key elements from each record, such that each record fills only one line in order that many records can be displayed at once.

GENERIC/OWN (G/O): Indicate whether you want the report to include your Company (own) or generic records.

FIN (FROM-TO): Enter the range of aircraft FINS to be included in the report.

REGISTRATION (FROM-TO): Enter the range of Aircraft IDs you wish to have reported. The default values (that will report everything on file) are 0000 and ZZZZ. You may narrow this down to a single aircraft by entering its registration twice.

AIRCRAFT TYPE/SERIES/ENGINE: Enter the aircraft type designator if you wish to have records for only one type displayed. The default value is ALL (press <Enter>). This will produce a report containing all types of aircraft in your fleet. In either case the report will be sorted strictly by Aircraft Registration. If a specific aircraft type is selected, you can further refine you report by specifying the series of aircraft. If you select a specific series of aircraft, you can select a specific engine type, or press <Enter> for to select all engine types.

RESERVE POLICY: Enter domestic, international and reclear reserve policy numbers. Pressing <Enter> without entering a policy number in a field will include all of the corresponding reserve policies in the report.

FORMAT: Refine the report by entering a format number, or press <Enter> to include all formats.

TCAS EQUIPPED: Indicate whether to include TCAS-equipped aircraft in the report.

ACARS EQUIPED: Indicate whether to include ACARS-equipped aircraft in the report.

INS EQUIPPED: Indicate whether to include INS-equipped aircraft in the report.

AGCS EQUIPPED: Indicate whether to include AGCS-equipped aircraft in the report. 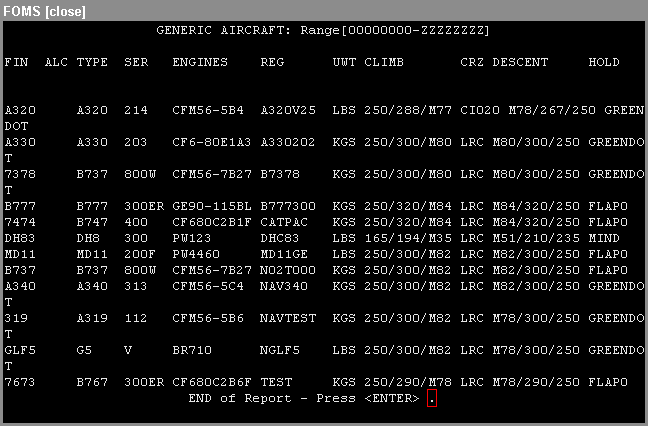 Hardcopy mode functions in the same manner as Screen mode, with the exception that the report is sent to the printer, so you do not have the ability to terminate the report in mid-stream.

Entering <Q> from the Command Line will return the Next PROGRAM-NUMBER prompt so that you have the option of going directly to your next program if you know the menu number, or of returning to the previous menu if you simply press <Enter>.