SIGMETs are queried as part of the flight plan generation, and/or they can be specifically queried by station, using the weather report tools.

SIGMETs normally include enough coordinates to determine the area for which they are issued. If not enough information is available, NAVBLUE will determine which FIR is responsible for the SIGMET and database against that FIR.

NFP determines whether or not there are valid SIGMETs by creating a search area 60NM on either side of the planned route, which includes a 60NM circle around the origin and destination stations. 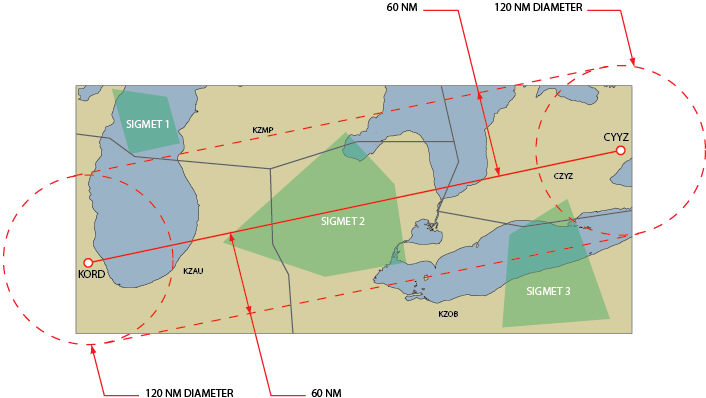 NFP will also database SIGMETs against an FIR, should there be a lack of latitude and longitude information included in the SIGMET. As such, if the route passes through an FIR which has valid SIGMETs), it will be included in the weather package.

SIGMET 1 is not in the search area, but it is in the KZMP FIR. SIGMET 1 will appear in the weather package if it is databased against the FIR, due to lack of latitude/longitude position information.

When querying for station specific SIGMETs, NFP creates a 60NM radius circle around each station inputted in the command field.

Since this search criteria does not involve a route, search area is limited to station coverage and not route coverage. This means that you may see SIGMETs in the weather package (greater coverage; route and station) but not in the weather reports.